I’m very happy to report that I am finally nearing the completion of the third of the Abby Renshaw Adventures, which will be titled Ghosts of Lock Tower. This book’s been over a year in the making and was originally planned as a novella. It took on a life of its own, as stories often do.

This month’s post is inspired by a phrase that appears in the novel. Midway through the story, something terrible happens. Abby, our protagonist, is devastated by horror and grief. She is also racked by guilt. She had a premonition something bad was going to happen, and feels she should have found a way to prevent it, or at least to warn someone.

Kevin, one of her mentors and an initiate of the same magical order as Abby, tells her this:

“You had a vision, Abby. But you didn’t have enough information to act on it. Or the power to stop what happened. I understand how you feel. But there’s a lesson in the Circle of Harmony that says ‘you can’t carry all the sorrows of the world.’ A true magician is prone to see many things. Sometimes that can include terrible evil. You cannot let yourself be crushed by it—not if you want to keep any hope of doing good.”

When I wrote that speech, the phrase carry all the sorrows of the world strongly resonated with me. I was dimly aware that it’s source was something I had read years ago, in Israel Regardie’s The Golden Dawn. 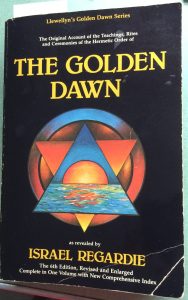 As you may know, the Golden Dawn was a magical society of the late 19th and early 20th Centuries. Its members included prominent occultists A.E. Waite, Dion Fortune, and Paul Foster Case, as well as artists, authors, and poets, such as Arthur Conan Doyle and W.B. Yeats. (See this article on Wikipedia for more.)  The Circle of Harmony, the secret magical society in the Abby Renshaw stories, is loosely based on the Golden Dawn.

As revealed by Regardie’s book, initiates in the Golden Dawn advanced through a series of grades. Each advancement was marked by a ritual, in which the candidate was given new knowledge. The system of grades and the paths of advancement had correspondences both to the Qabala and the Tarot.

In some rituals, paths would be shown to the candidate but were not yet “open”—until the candidate had attained a higher grade. This was the case with the particular ritual I remembered. The path in question is named for the Hebrew Letter Mem, and corresponds to the Tarot Card, The Hanged Man. It is a path of sacrifice.

In this ritual, the candidate is told:

“The Portal of Mem is barred. Yet it is well to be willing for the Sacrifice itself, is as yet, not fully prepared. For in the Path of Mem rules the Hanged Man, the power of the Great Waters. Can your tears prevail against the Tide of the Sea, your might against the waves of the storm, your love against the sorrows of all the world?”

From The Golden Dawn, as revealed by Israel Regardie, Llewellyn Publications, 1990,  page 212).

Surely, in the way of poetry, there are many meanings we could unwrap here. To me, an important one is this: No matter how awful the evil we witness in the world (and these days, if your eyes are open at all, you’re witnessing plenty), we must not let it destroy us.

As Kevin tells Abby, we are not required to carry all the sorrows of the world. We are only required to do the good that we can.

I think this quote from the Talmud gives the same message:

At least, that’s how I see it.

Ghosts of Lock Tower is scheduled for publication Summer of 2019

Meantime, you can check out the first two Abby Renshaw adventures here.