In Ghosts of Bliss Bayou, the first book of the Abby Renshaw adventures, Abby is a high school student troubled by nightmares and scary hallucinations.

Trying to figure out the source of these apparitions, Abby visits her grandmother in the small town of Harmony Springs, Florida. There, Abby discovers a history of occult happenings and learns that the town was founded in the late 1800s by spiritualists, including one of her ancestors.

Cassadaga is still a spiritualist center, and visitors are welcome. I toured the place with my wife a year ago, and we had a wonderful time.

The entrance to the camp is located on County Road 4139 not far from DeLand, Florida (in between Orlando and Jacksonville).

The hotel and visitor center stand on one side of the street. On the other side are shops and psychics offering readings. These are “not affiliated with the spiritualist camp.” Everyone wants to be clear about this.

The Cassadaga Hotel  dates to the 1920s. In addition to hotel rooms, they offer psychic readings and healing sessions. The restaurant is called, oddly enough,“Sinatra’s.” The food on our visit was excellent and the atmosphere was atmospheric.

The visitor center has a bookstore and a meeting hall. Here you can attend classes and schedule sessions with mediums and healers. We signed up for a introductory lecture and walking tour.

The lecture was given by a young woman who identified herself as “a first level student of the camp.” She used a slide show and talked for twenty minutes about the history of spiritualism in the 19th Century. She touched on Andrew Jackson Davis, the Fox Sisters,  and George Colby, the man responsible for founding Cassadaga. You can read about Colby and the founding of the camp on their official website, here.

Our lecturer also described the philosophy and belief system of spiritualism as it is still practiced in Cassadaga. She said there was an active portal right in the corner of the lecture hall where a boy and girl spirit came through. She had not met the girl but had met the boy many times.

Following the lecture, our guide led us outside. As we walked down the road, she talked about the hotel and the different houses and their history. 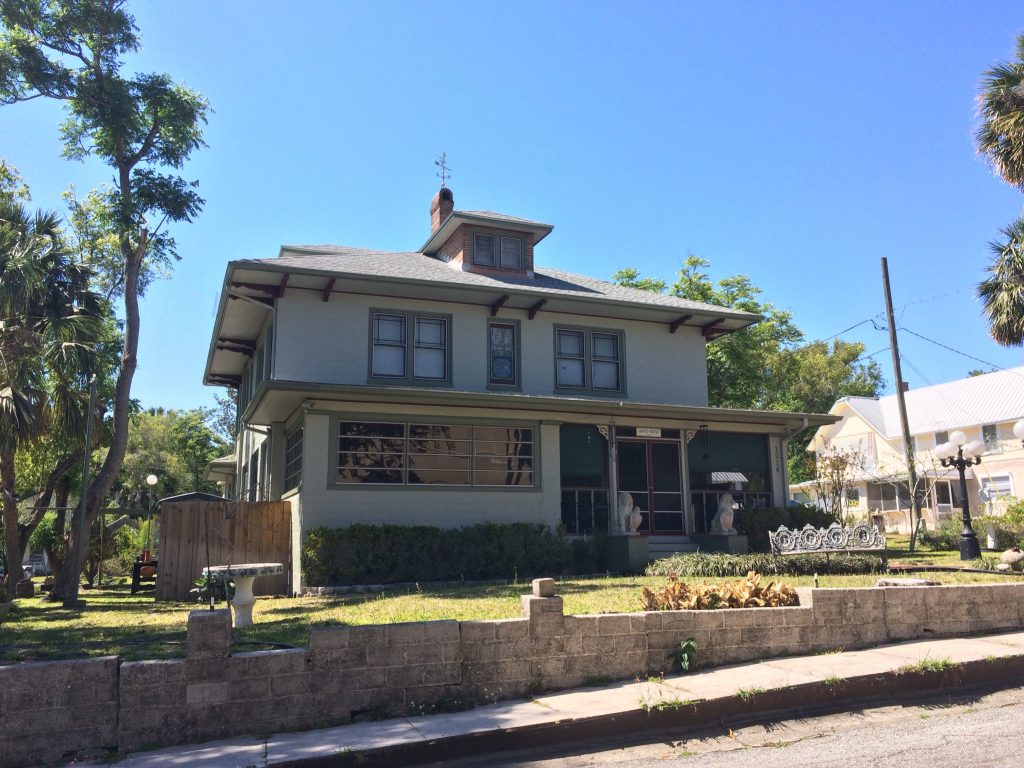 This tree outside one of the houses was carved in memory of a child of one of the original families.

Seances, we learned, were often held in attics. There were special windows built into the houses to allow the spirits to come and go.

The tour ended at the temple, which our guide unlocked for us. It is a large auditorium with a stage and interesting pictures along the walls. They hold services here every Sunday.

The tour guide also pointed out the Fairy Garden, which had an entrance up the hill and borders a forest. Following the tour, my wife and I walked up there. The energy was somewhat spooky. People had left all sorts of statues, chairs, and shiny baubles.

We walked in a ways and then felt we should not go farther.

If you enjoy off-the-beaten track destinations, and are looking for a little adventure, I can definitely recommend a visit to Cassadaga, Florida.

You can learn more about the Abby Renshaw adventures here.