This month we have an author interview with Kasper Beaumont, creator of The Hunters of Reloria trilogy (young adult sword and sorcery) as well as fantasy short fiction. December 14 will see the publication of her newest work, a contemporary urban fantasy titled Captive of the Darkness (Hidden Angel Series, Book One). 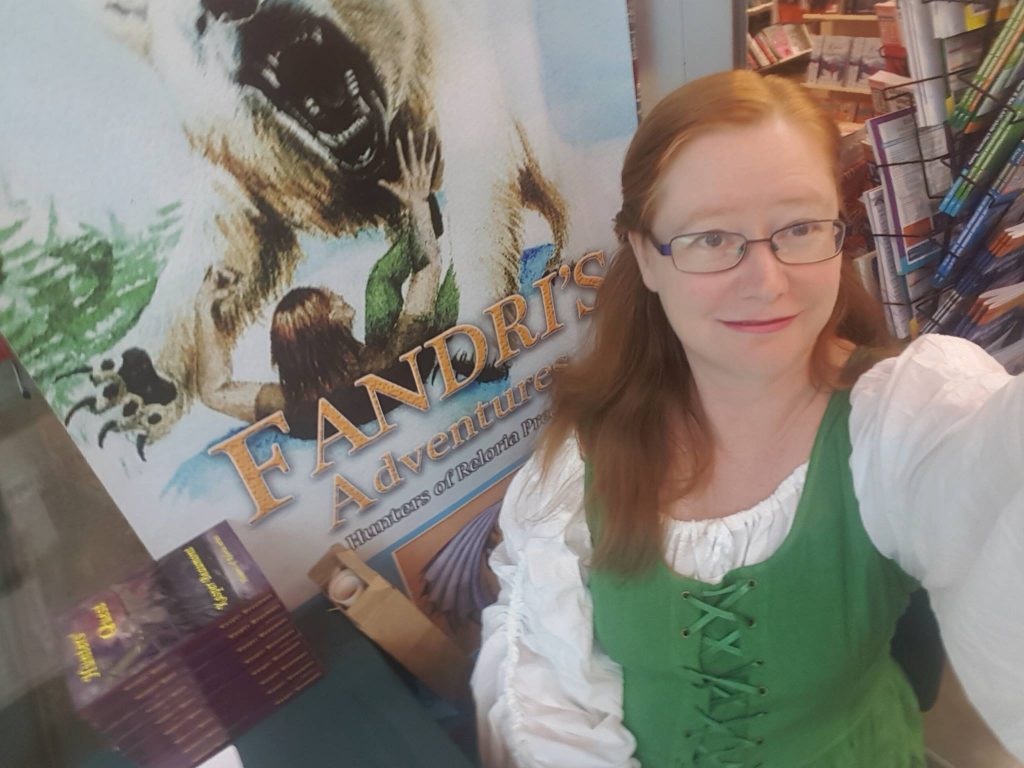 Welcome Kasper. Please tell us a little about yourself and your writing.

G’day Jack.  Great to be here, thank you.  Your Triskelion Books website sure looks interesting, and I’ll be checking out your Mazes of Magic book for sure. I love Egyptology.

Oops, back to the question. Yes, I’m an Australian author of fantasy books.  Four in The Hunters of Reloria series (yes I called it a ‘trilogy’ and I fail at maths haha). I have now started on another trilogy (slow learner here) and think it will be three books, but I do find my characters have their own ideas about things, so we’ll wait and see.

When did you first decide to be a writer?

In primary school I was that geeky kid reading Lord of the Rings while my classmates were enthralled by Dr. Suess. I guess that was the first clue. When we swapped our creative writing books and read each other’s work aloud, my friends couldn’t even pronounce, let alone comprehend, some of my stories. Oops, sorry guys. At least we’re on good terms now. One friend named Becky recently gave me a Galadriel award for creative writing. (She totes made up that award, but I gladly accepted.)

I then grew up, went through uni where my assignments struggled to fit in under 2K or 5K word limits. Then after having a few halflings (kiddos) of my own, I rediscovered my love for creative writing.

What first drew you to writing fantasy?

My first thought to answer this is laziness (chuckles). I’m not one to spend hours in libraries researching the past when I can create my own worlds. I have vivid dreams, such a halflings and fairies playing in wheat fields or mace-wielding lizardmen being tossed into the air by a dragon.

I guess another instigating factor was when my eldest child started school and I thought it would be a cool project for us to write a book together and see our ideas in print.

Are there particular books, movies, games that were a major influence on your work?

The Belgariad series by David Eddings was one of my faves growing up. I felt pure joy and the excitement of waiting for the next installment in the series. It’s probably why I chose to pen a series instead of a single novel. You get more time to formulate and expand your ideas over several books.

Movies I enjoyed growing up were madcap adventures like The Three Musketeers, The Goonies, modern spins on classics, such as Neverending Story, magical escapism such as E.T, and I can’t overlook my fave of all time, Star Wars, for sheer entertainment value.

You were born and raised in Australia. In what ways would you say that influenced your work? Put another way, do you see any particular differences between Australian fiction and that of other countries?

Mateship is a strong theme in Australia. Being the driest inhabited continent and prone to bushfires, the people are tough and form deep bonds where we look out for each other. I guess that is why my characters develop such deep friendships and risk their lives for each other, like the traditional ‘Aussie digger’ soldiers in the World Wars.

Sometimes I write of things we lack in my country such as historic castles and particularly documented histories. Our culture here is very old, but has limited written or man-made edifices, more a sense of one with nature and lore stored in the minds of elders and passed down from generation to generation.

Can you tell us about your newest work, Captive of the Darkness?

On Riley’s 18th birthday, she is told she’s a demon hunter, like the rest of her family. She shrugs the news off in disbelief but that very night she unwittingly enters the lair of a powerful demon and her whole world is turned upside down.

She meets a stripper nicknamed Cupid, who states he is prisoner of the demon. He is a graceful ballet dancer forced into slavery but yearning to escape his dangerous master. When she sees a glowing aura around this young man, she realizes he isn’t just any ordinary lad, but something very special. She knows she must try to save him. 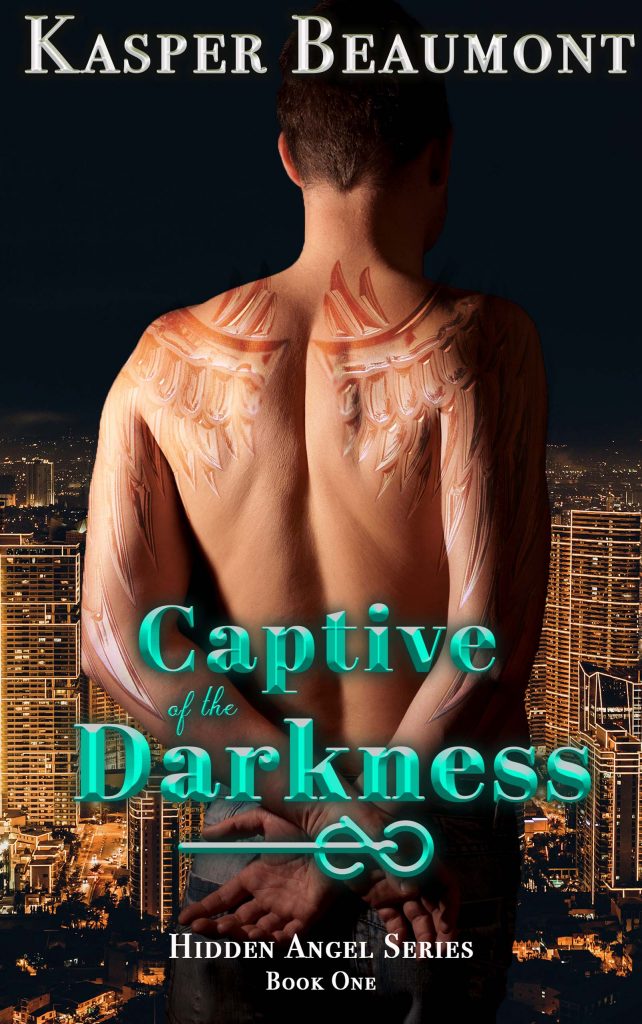 As urban fantasy, Angels and Demons is a departure from your Hunters of Reloria series. What influenced you to take this new direction?

Good question. I think my reading interests have been leading me in this direction for many years. After years of loving epic fantasy, I’ve been reading a lot more paranormal and mature content and guess this is where my inspiration developed. Influences would be The Fallen series, Anita Blake Vampire Hunter, Sookie Stackhouse, Anne Rice, etc.

Also, my love of culture is evident in the ballet dancing and the artwork (more in the 2nd book, so I won’t elaborate). I still do love coming-of-age and graduation themes though. It’s such an important part of life, and I think that being around and writing about young people keeps me young at heart too.

How would you describe the challenges of writing urban fantasy versus epic fantasy or sword and sorcery?

Hmm…I guess for me it was a more mature writing style and language. They are quite different genres. In the Hunters of Reloria series I could just throw in a twin planet or a new form of magic without having to explain the physics of how that would work or why. The beauty of writing in an alien world, anything is possible.

In the Hidden Angel series, I feel more responsibility to make the paranormal abilities and characters believable as though this is just a part of the real world you didn’t know about. I have thrown in a few little ‘Easter eggs’ of places that people living in Redcliffe and Brisbane may recognize. One is even a hotel which was demolished but has been reborn in another location in Captive of the Darkness.

The Hunters of Reloria books are described as YA (young adult) fiction while Angels and Demons is adult fiction? How did you adjust your writing for the new audience?

I’m hoping there aren’t young readers here, but if so, please look away now.

The main mature concept introduced in Captive of the Darkness is male exotic dancers. You know what they say, sex sells, baby. That may sound a bit cocky, but to keep it real, I write what I like to read and hope there are readers with the same tastes as mine who would like to follow me down the rabbit hole. 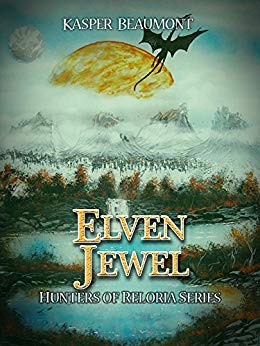 While we’re on the subject, can you tell us a little more about The Hunters of Reloria?

This fantasy adventure begins when the magical continent of Reloria is threatened by cruel, scaly invaders called Vergai from the wastelands of Vergash. These invaders are barbaric and are intent on destroying the protective elven forcefield and conquering peaceful Reloria. The Vergais’ plan is to steal the Elven Jewel which is the key to the Relorian defence system.

Halfling friends Randir and Fendi and their bond-fairies are the first to discover the invaders, and they embark on a quest to save the Elven Jewel. They leave their peaceful farm village with their fairies and race against time to stop the invaders. They join forces with dwarves, elves, men, and a mysterious dragon, and call themselves the Hunters of Reloria.

The quest is perilous, with numerous encounters with the ruthless Vergai, who are determined to fulfill their mission. The Elven Jewel is stolen and the quest becomes a race to the portal to retrieve the jewel before it can be taken to Vergash. A battle for Reloria ensues where the consequences for the Relorians is death, unless Vergai are stopped.

I fly by the seat of my pants. At best I have a general outline of the story and sometimes even then I change the plot in the middle of writing. The uncertainty is quite fun and keeps me on my toes. With work and family commitments, I don’t always get to write every day, but I do enjoy writing a lot when I have the time.

This past year I created two wonderful online groups with my friends Cheryllynn Dyess and Marsha A Moore and later have been joined by around 20 other wonderful collaborators of whom I’d like to particularly mention and thank Rennie St James.

Join a group, read aloud, get feedback, and hone your craft. We all have to start somewhere, and practice makes perfect. (I’m the Queen of the clichés today, it seems).

I think the most important advice is to keep going. Not everyone who reads your work will love it. Even the biggest writers in the world have had rejections, so don’t quit when someone doesn’t like your work.

May the force be with you. Never give up, never surrender. Live long and prosper. Home is behind, the world ahead, and there are many paths to tread through shadows to the edge of night, until the stars are all alight.

If you know and like those four quotes, then you know where to find me.

Also, a review is the best gift you can give an author.

You can find Captive of the Darkness on Amazon

Can an angel be hiding here on Earth?

A veil of secrecy is lifted on Riley’s 18th birthday. She thought she knew the world, but now discovers she is a demon hunter. It doesn’t seem real, but then she meets Him, a charismatic young dancer with special powers.

He is a prisoner of a powerful demon.

What secrets does this stranger hide? Will Riley risk her own family to save Him?

To learn more about Kasper Beaumont visit these links:

One thought on “Interview with Fantasy Author Kasper Beaumont”