This month we are pleased to present an interview with John (JC) Kang, author of The Legends of Tivara, a multi-volume epic fantasy “series of series” that includes, among others, The Dragon Songs Saga and Scions of the Black Lotus. 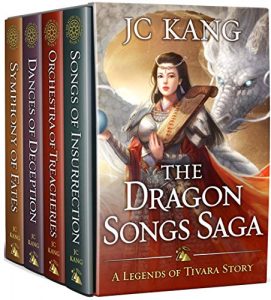 Welcome JC. Please tell us a little about yourself and your writing.

Thanks for having me!  I’m an acupuncturist by trade, a Wing Chun Kung Fu instructor for fun, and I do a little writing, as well.  I generally write epic fantasy with a mix of cultures drawing from Earth’s history.

When did you first decide to be a writer? What first drew you to writing fantasy?

I grew up both GMing (Game-Mastering) and playing D&D, and as a teen, I’d stood in line waiting for Dragonlance books to come out.  As something of a misfit, I tried to write a story set in my game world then. It was a total mess. Twenty years later, I came across my worldbuilding materials while cleaning out my room in my childhood home. Of course, as an adult, I had a better understanding of matters like economies and gravity, so I decided to recreate the planet that I’d envisioned as a teenager.

On the seventh day, I rested. It was then that I realized I would probably never play D&D again; and since as a DM, my players always frustrated me with their free will, I decided I would write.

Are there particular books, movies, or games that were a major influence on your work?

Besides Dungeons & Dragons, Civilization was a huge influence in terms of giving me the idea of a second world with Earth Cultures.  Of course, Star Wars, Star Trek, Lord of the Rings, Chronicles of Narnia were huge literary and media influencers when I was growing up.

Do all of your stories take place in the same fictional universe? How do you approach setting and world building?

So far, yes!  The primary characters of one series might make a cameo in another, and there is one character who appears in all of them.

For world building, one of the most important things to me is continuity and interconnectivity.  For example, I created a low-orbit moon which is tidally locked and always in the same place in the sky. I started to think, how would that moon influence the people viewing it from below? What cultural practices would that lead to?

Yes, I remember thinking what a cool idea that moon was. It gave a science fiction touch to the fantasy world.

I am always interested in the magical aspect of fantasy. What inspires the magic or supernatural elements of your stories?

I give each ethnic group their own form of magic, but it is all based on borrowing wave energy from an abundant mineral on the planet. Each culture describe the manipulation of frequency, wavelength, and amplitude to alter reality it in different terminology:  For example, the “Roman” Diviners hear the Gods’ Whispers to Divine; whereas the “West African” Mystics sense the Resonance for sorcery; South Asians channel Vibrations into fighting prowess, etc.

I think a big challenge of fantasy is creating magic that is plausible and understandable to the reader. Do you construct rules-based magical systems or approach it in some other way?

I would neither call the magic system hard or soft—it’s firm. There are definite rules, but I don’t keep track of mana points or anything like that. The key to me is consistency: if there is magic, how will that affect the development of a culture, and the cultures around it? 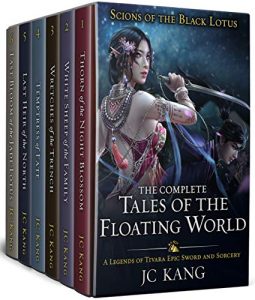 Of all the characters you’ve created, who are your favorites and why?

My favorites have changed over the years, but now, I would say it is my half Asian/half-elf ninja. Originally, she was just a minor character meant to show the world was a mix of Eastern and Western fantasies; but my first critique partners loved her so much, she got an important back story. She’s fun to write because the snark in her viewpoint.

Technical?  Not technical writing—I actually worked in that field at one time—but rather, the idea of structuring variety in sentence structures and patterns. Beyond that, I can’t say I’m a brilliant wordsmith who knows the perfect word to evoke the perfect image.

Your biography includes professional experience as a Chinese Medicine Doctor and a martial arts instructor. How have these experiences added to your fiction?

Martial arts has helped me choreograph fights. Chinese Medicine has helped come up with some cool sayings. 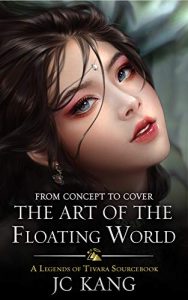 What are your current projects? When will we see your next book?

I’m currently working on the sequel to Masters of Deception, which chronologically takes place between Crown of the Sundered Empire and Orchestra of Treacheries (though the sequel to Crown, and possibly a serial) will squeeze in between those last two.

Read a lot. Critique, because if you’re like me, in reading unpolished works, you will see what doesn’t work, and you’ll realize you probably make the same mistakes.

I’m deeply humbled by those who’ve spent time reading my stories. Thank you!

You can find JC Kang’s books on his Amazon page.