This month we wrap up our series on conveying backstory in fiction without losing dramatic momentum.

Review: What We’re Talking About

In the Introduction to the series, we discussed the elements of dramatic writing as described by Jerry Cleaver in his book Immediate Fiction. As illustrated, these essential elements are

All of this is supported by

Again, we’re defining backstory as all of the background information a writer needs to communicate so that readers will understand a scene. This might include descriptions of settings, the characters’ past experiences, motives and psychology, and past events that are not shown on stage.

The problem we’re exploring is how a writer can convey all of the backstory without losing the reader’s interest in the immediacy of the drama.

Technique #5: Start a Scene Then Drop in Sections of Backstory

This is a technique that is often employed but not often discussed. As a reader, once you start noticing it, you’ll see it is used often.

Basically, the author starts a scene in the present, ideally with an emotional hook to engage the reader. Then after a few lines, the narrative skips back to reveal backstory. This is not a flashback, just bits of exposition sprinkled in, usually from the point of view of the character that we are following in the scene.

Essentially, the writer drops a scene in the reader’s lap, gets them involved, then steps back here and there to explain the backstory.

Science fiction and Fantasy typically require the author to cover a lot of backstory—specifically, details about the world in which the story is set and how it differs from our world.

This example is from Kim Stanley Robinson’s Red Mars, an epic, award-winning novel about the colonization of the Mars. The scene takes place on one of the first colony ships, right after launching. One hundred carefully-selected colonists are celebrating.

In Torus D’s dining hall, they mingled in a kind of cocktail party, celebrating the departure … Maya wandered about, sipping freely from a mug of champagne, feeling slightly unreal and extremely happy, a mix that reminded her of her wedding reception many years before. Hopefully, this marriage would go better than that one had, she thought, because this one was going to last forever … Maya turned down an offered refill, feeling giddy enough. Besides, this was work. She was co-mayor of this village, so to speak, responsible for group dynamics, which were bound to get complex. Antarctic habits kicked in even at this moment of triumph, and she listened and watched like an anthropologist, or a spy.

“The shrinks have their reasons. We’ll end up fifty happy couples.”

“And they already know the match-ups.”

She watched them laugh. Smart, healthy, supremely well-educated—was this the rational society at last, the scientifically-designed community that had been the dream of the Enlightenment? But there was Arkady, Nadia, Vlad, Ivana. She knew the Russian contingency too well have to have many illusions on that score. They were just as likely to end up resembling an undergraduate dorm at a technical university, occupied by bizarre pranks and lurid affairs. Except, they looked kind of old for that sort of thing …

What Do We Learn Here?

This passage, part of a longer scene, drops us into the middle of the action. We’re in the viewpoint of the psychologist Maya, and each action and snippet of dialog is followed with her reflections— which provide much backstory about Maya, her colleagues, and the mission.

Using this method in your writing takes some practice. Begin by searching out good examples in writers whom you admire, and analyze them carefully.

This concludes the series on conveying backstory in fiction. I would love to know what you think about this and previous posts.

Returning from our mermaid adventure last month, we are back to talking about the craft of fiction.

We’re defining backstory as all of the background information a writer needs to communicate so that the reader will understand a scene. This might include descriptions of settings, the characters’ past experiences, motives and psychology, and past events that are not shown on stage.

Technique #4: Characters Tell Each Other the Backstory

We’re all familiar with scenes where a character learns some backstory by hearing it from another character. When done well, this is a seamless and effective way to convey information.

But you have to be careful. Done poorly, this technique can easily seem contrived, the dialogue ‘stagy.’ In science fiction writing, we are warned to avoid the “As we all know, Jim” syndrome. Never, never start a speech with “As we all know.” If we all know it, why are you saying it!?

Example: From Robert B. Parker

In this example from Parker’s , Death in Paradise, Jesse Stone is chief of police for a small town in Massachusetts. He’s investigating the murder of a teenage girl, and it’s led him to meet Lily, the principal of the high school. They’ve covered the details of the case, and now the conversation turns personal.

Lily crossed her legs the other way. Jesse waited.
“How did you go from shortstop to policeman, Jesse?”

“My father was a cop,” Jesse said. “In Tucson. When I couldn’t play ball anymore, it seemed like the other thing that I might know how to do.”

“And how did you end up in Paradise?”

“I was a cop in L.A. I got fired for being a drunk. And my marriage broke up. And I figured I’d try to start over as far from L.A. as I could.”

“Are you still drinking?”

“Was that why your marriage broke up?”

“There always are. Aren’t there?”

What We Learn in this Scene

In just 130 words here we get a lot of backstory. We learn not only about Jesse’s history (which readers who have read this far know some of already), but also a bit of Lily’s.

In terms of story-craft, notice how the exposition comes up in a scene that is mainly about something else. Suddenly, it shifts gears and moves the characters’ personal stories along.

Also, it not only tells some of Jesse’s history, but it shows us how he sees himself and presents himself to others: world weary, straight and direct, brutally honest about himself. Significantly, the prose style mirrors these characteristics, and is also extremely easy to read.

Tips for Using This Technique

Again, to disclose backstory in dialogue, you need to be crafty:

Next time, we will wrap up this series by discussing the last of our Five Techniques, one that is frequently used but rarely discussed: Sprinkling Backstory into a Scene.

This month, I was honored to speak to the Sarasota Fiction Writers group. My topic was “Five Ways to Show Backstory without Losing Dramatic Momentum.” The talk was partly based on a guest post I did earlier this year for Anita Rogers’ Indie Spotlight.  In that post, I described three techniques for conveying backstory in scenes.

For the Sarasota talk, I expanded the topic, and we discussed examples from some well-known writers. I’ll be blogging about each of the Five Ways in upcoming posts.

To set the stage, this post discusses models of storytelling and dramatic structure in fiction. As in a previous post,  I’ll be drawing partly on what I’ve learned from a wonderful book called Immediate Fiction by Jerry Cleaver. Here’s a picture of me at the meeting holding the book: 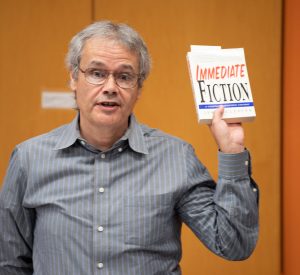 A Model is a Map

There are lots of good books on the craft of writing, and many of them use frameworks or models. I view these models as analogous to maps. A Map is an abstraction, a picture that helps us find our way. But you want to be careful not to confuse the map with the territory.

Your story is the territory. It will always be richer and more complex than any map. Also, no model perfectly fits every story.

So, if you’re a writer, you don’t want to get so worried about adhering to a particular model—no matter how good—that you lose the creative energy of writing your story. This is especially true when writing the first draft. Basically, I find models most useful during the revision stage; they help me figure out where the story might be losing effectiveness. And this lines up well with the approach recommended by Jerry Cleaver in Immediate Fiction.

The Five Elements of Storytelling

In his model, Cleaver breaks down the craft of story into five essential elements. Pictorially, it looks like this:

The first 3 elements are a model of drama. They apply to every scene and to the story as a whole.

This second model derives, I believe, from theories of screenwriting, although I see it discussed often in terms of fiction as well. As pictured, a story consists of scenes and sequels, with the intensity rising over time.

Scenes can be understood as consisting of the five elements discussed in the first model.

Sequels are pieces of narrative that connect scenes. A sequel shows the characters’ response to the previous scene and then sets up the scene that follows. As shown in the picture, not every scene needs to have a sequel. Sometimes one scene immediately follows another.

Based on these models (and on lots of other expert opinion) fiction works best when it engages readers with immediate presentation of characters’ conflicts, actions, and emotions. This takes place mainly in dramatic scenes. Fiction can also make use of narrative sequels used to connect scenes.

But a story inevitably contains a lot of information the reader needs to understand in order to understand what’s going on in the scenes and sequels. This data includes descriptions of settings and past events, and of characters’ backgrounds, psychology, and motivations. In science fiction, fantasy, and historical fiction, it also includes information about the world and how it differs from the current “real” world.

For convenience, I call all of this information the backstory.

How does fiction convey the backstory without losing the immediacy of engagement or dramatic momentum? Skillful writers use a number of techniques, which I will explore in upcoming posts.