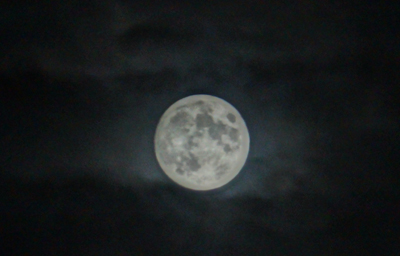 This month I am celebrating the completion of the Glimnodd Cycle audiobooks. Book 3, A Tournament of Witches has just gone live on Audible. You can read more about the series here.

To mark the occasion, here is an excerpt from Chapter 1.  Amlina, the exile witch of Larthang, has succeeded in winning back the mighty Cloak of the Two Winds, but at a terrible cost.   She and her warrior crew are in hiding while Amlina struggles to regain her health. She still hopes to return the Cloak to its rightful owners, but when that  can happen is in doubt …

Streams of light and shadow—some drifting slowly, others pouring in torrents, crashing in waves, spinning into whirlpools—so, in her meditation, Amlina the witch perceived the currents of the Deepmind, the realm below the surface of appearances.

In her immediate vicinity she perceived dense curtains of power, sparkling on one side, utterly dark on the other. But the curtains were separating, rips appearing in their fabric.

Once again, her concealments were coming undone.

Daily now, they grew flimsier, harder to maintain. Of course, she had known this must happen sooner or later. One could not hide a source of power so great as the Cloak forever—no matter how carefully the designs of concealment were woven, no matter how much energy fed those designs.

Amlina’s hands rose from her lap, fingers pointing and circling as her mind summoned power to repair the barriers. But even as she envisioned the fabric mending, the tattered weave thickening again, pain burned in her heart and throbbed behind her eyes.

That, of course, was her real problem—the dark power that seethed in her body, growing stronger, more insistent, no matter what measures she took to disperse it, to bleed it away.

Amlina opened her eyes, staring at the red lamps arranged around the room, the feathered desmets and glittering balls that hung suspended on threads. She sat cross-legged in her closet-bed, alone.

Below the floor, she could faintly hear her friends in the great room downstairs—talking, the clatter of pots and dishes as they prepared breakfast. Draven, Glyssa, Lonn, Kizier—friends who had become her family. This farmhouse in the hills south of Fleevanport was such a peaceful place, belying the turmoil of the outer world, the fear and chaos that had filled Amlina’s life for so long—chaos that was closing in on her again.

Half a year had passed since their arrival. At the start of First Winter they had sailed into the harbor of Fleevanport, their Gwales raiding ship a unique sight in these parts. That and the unusual crew had been more than enough to attract attention—scrutiny Amlina did her best to fend off with witchery. As soon as possible, they used some of their treasure to purchase this house in the hill country south of the town. Originally built as a hunting lodge by a Tathian merchant, it had become a farmstead and passed through the hands of several owners who tried breeding sheep and woolgoats—a difficult proposition in the frigid climate. Set on a wooded hill overlooking an inlet of the sea, the place made a perfect hideout for a renegade witch and her pirate companions.

The first months had been peaceful, Amlina grateful for victory, able to rest at last. Together with her warrior crew, her klarn, she had defeated Beryl, the Archimage of the East, reclaimed the Cloak of the Two Winds, which Beryl had stolen long ago. Amlina planned to return the Cloak to Larthang. She only meant to linger in Fleevan a short time, long enough to recover her health. The great ensorcellment she had forged, the Mirror Against All Mishap, had taken its toll, left her weak and sick.

At first, she seemed to be recovering, nourished by the peace of this place, by the presence of her friends, and by her love for one of them, Draven. That love had proven all she could have hoped for and more. So many nights she had fallen asleep beside him, satiated from lovemaking, warmed by his body, contentment filling her heart.

But even as her strength returned, her energies lurched farther out of balance. The Mirror was forbidden magic, blood magic. By invoking it, Amlina had raised fearsome, dark power. She had thought that when the Mirror expired, the evil force would drain away.

That hope had proven false. Instead, as her vitality was restored, hunger for more power grew. Food no longer satisfied her. Her coupling with Draven became by turns frantic and repellent. When she started imagining biting him, tasting his blood, she knew how deep the sickness ran.

With the arrival of Second Winter and the ice-sailing season, Amlina had planned to depart for Larthang. But in all her treasured imaginings, she had returned in triumph, presenting the Cloak at the House of the Deepmind, victorious and honored. Instead she was now a broken, tainted thing. Were she to return in that condition, she would likely be an outcast still, reviled because of the evil magic that possessed her.

So she had delayed longer, trying every method she could to overcome the sickness—meditations, purification rites, imbuing herself with light. She had consulted with the scholar Kizier and with Buroof, the talking book, who knew the magic of ages past.

All the time she had studied and fretted, others were searching for the Cloak. The Iruks had reported stories from Fleevanport of war in the Tathian Isles. On their voyage here, Amlina’s party had used the Cloak to unleash a storm that blew away the fleet of Hagan, Prince-Ruler of Kadavel. With the disappearance of Hagan’s fleet, rival city-states had moved to fill the void, seizing Kadavel’s lands and ships. In the midst of these skirmishes, the navy of Larthang had suddenly invaded the Island of Gon Fu—forcing the Tathians to abandon their differences in the face of a common foe.

To all of the rulers of the Three Nations, the Cloak would be an enviable prize. As a weapon of war, it could freeze whole cities, scatter fleets. Increasingly, Amlina had sensed the minds of deepshapers searching—Tathian State Sorcerers, magician-priests from Near and Far Nyssan, witches of Larthang.

As the pressure mounted and her concealments frayed, she still hesitated, indecisive, unsure. A few days ago she had invoked the Bowing to the Sky, the ultimate surrender to the Deepmind. But that ritual gave her no answer at all—except that she must wait and accept.

It was the Bowing that originally told her to go forward with the blood magic. At least, that had been her interpretation of the message at the time. And that course had led her to defeat the Archimage and win the Cloak.

But at what cost?

Despondent, Amlina wondered if she had vanquished the bloodthirsty Queen of Tallyba only to become like her.

“That is right, little Larthang, little fool.” Beryl’s voice crept into her mind.

Amlina lurched out of bed, clutching her skull with both hands. The voice came often to torment her. Was it the product of her imagination, or the Archimage’s actual ghost? She did not know.

“You are not real,” she said. “You are dead and have no power over me.”

“I have no power, it is true,” the voice answered. “But the blood magic, that has power, power you cannot deny. The cravings grow and grow. Sooner or later they will overwhelm your paltry qualms and then … your lover, your friends, victims you lure from the town, it will not matter.”

“No,” Amlina whispered through closed teeth. “I will not become like you.”

“You were always like me. You just refuse to see yourself.”

That much might be true. Amlina had often thought herself lacking in self-awareness, blinded by ambition, an exaggerated sense of her own importance and power. Ambition had brought her to this …

“There is no other way to still the cravings,” Beryl taunted her.

“Oh, but there is.” Amlina crossed to a dressing table, pulled open the top drawer. Reaching to the back, she extracted a small bone-handled knife with a razor-sharp edge.

“Cutting yourself is no solution,” Beryl whispered.

“Begone,” Amlina said, and used the knife to trace a sign of banishment in the air.

Pulling up the sleeve of her dressing gown, Amlina stared at her forearm. The tiny scars were growing numerous, a pattern like a spider’s web. She used a cosmetic and a cantrip, a mind-trick, to hide the marks from Draven and her friends. How long would that concealment last?

No matter, she must relieve the pressure. She must balance her energies, restore her equilibrium, so she could make plans to return the Cloak to Larthang.

Time was running out.

Deliberately, she sliced the steel edge along the skin above her wrist. Holding her arm over a porcelain basin, she squeezed the spot above the cut and watched the red droplets fall.

***
— from Tournament of Witches, Chapter One.
Copyright (c) 2020 by Jack Massa. All Rights Reserved. 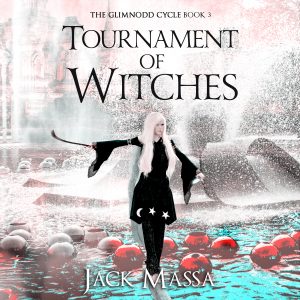 Read about the Glimnodd series here.

Or check out Tournament of Witches on Amazon 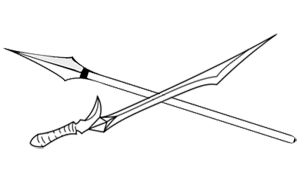