Epic Fantasy in a World of
Ice and High Magic

On the world of Glimnodd, magic winds blow over the sea, changing the water to ice and the ice to water. Human and non-human species love and hate, quest and battle, and practice arcane arts of magic. 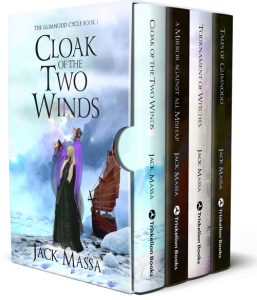 Amlina, exiled witch from a land of great witches, seeks to return the mighty Cloak of the Two Winds to its rightful owners. Compelled by necessity, she joins forces with a crew of barbarian pirates, who share a group soul with mystic powers of its own.

Together, witch and warriors journey across the magical world of Glimnodd, meeting strange creatures, deadly enemies, and ancient, forbidden sorceries. The quest will change each of them in ways they could never have foreseen.

This omnibus edition includes the three complete novels of the Glimnodd Cycle, plus bonus stories that form the start and end of the saga.

Find it now on Amazon

Separate Books in the Glimnodd Cycle

Book 1: Cloak of the Two Winds 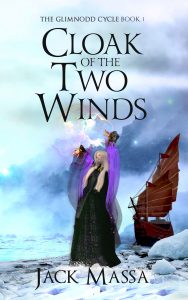 Find it now on Amazon.

Pirates, sorcerers, and witches battle
for an ancient magical treasure

Amlina the witch has fled the city of the tyrant Archimage of the East. She plans to return the fabled Cloak of the Two Winds to its rightful owners. But Amlina’s ship is waylaid by barbarian pirates at the South Polar Sea.

Lonn the Iruk skipper has led his boat away from the hunt after dreaming of fabulous treasure. When his crew captures the witch’s ship, they get more than they bargained for. After carrying off her possessions, they are robbed in turn. Worse, one of their crew is taken—Glyssa, the woman Lonn loves.

To rescue her, the pirates must join forces with Amlina on a perilous voyage far from the seas they know. To Lonn and his mates. nothing matters but saving Glyssa. But Amlina knows much more is at stake. In the wrong hands, the Cloak of the Two Winds can unravel the age-old magic that keeps the world from chaos.

Book 2: A Mirror Against All Mishap

Find it now on Amazon

Amlina the witch and her Iruk warriors have found refuge in the north. But with winter’s end, Amlina must choose: retreat to her homeland, or arm herself with forbidden sorcery and face her great enemy Beryl one last time.

The Iruk Glyssa also must decide. Will she risk the dangers of magical initiation for a chance to heal her wounded soul?

On the far side of the world, Beryl is recovering from wounds of her own—by consuming more and more human blood. Once healed, she plans a grisly revenge on Amlina and the Iruks.

“The tyrant’s witchcraft is mighty. She will rule for a thousand years, unless…” 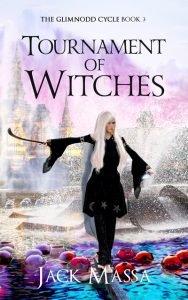 Amlina the witch has won back the magic Cloak, but the price may be madness or death.

Amlina has recovered the stolen Cloak of the Two Winds. But victory came at a terrible cost: The forbidden sorcery she invoked left a stain on her soul—a shadow that threatens to drive her to madness.

Meantime, Eben the Iruk pirate is squandering his loot on a life of ease and too much drinking. When a bee-winged lady discovers him passed out in an alley, Eben is called to a new quest.

Amlina and her warriors sail to Larthang where she hopes to find healing for her damaged soul. But the fabled land of witches is torn by rival factions. The heroes meet honor and treachery, rewards and dark sorcery.

Can Amlina fulfill her purpose to become the Keeper of the Cloak, or will she and her mates be devoured by a creature reborn from an earlier age? 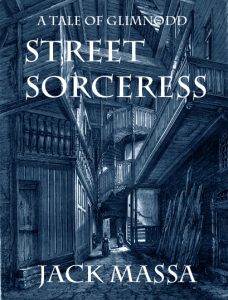 This story, a prequel to the series and introduces the witch Amlina and the magical world of Glimnodd. You can get  it free by signing up for our email newsletter (from which, course, you can unsubscribe at any time).

Get Street Sorceress for free.

About the World of Glimnodd

A map of Glimnodd is available here.

Read about the history of Glimnodd here.

If well-written sword & sorcery is your thing, you’ll love this novel. – Jeffrey J. Haas, author of Searching for Nada

A rich, detailed and complex world. Can’t wait to read the next book! – Amazon reviewer

The only problem I had with this book is that it ended before I was ready for it to. – Amazon reviewer

Loved it! In my opinion, this book is a rare find- a gem. It ticks all the boxes: beautiful descriptive prose (not at the expense of pace), great original story with plenty of action, interesting well-developed characters and unique world. Another strong point was the magic system: deep, extremely well-thought out – intriguing. This was a delightful, immersive reading experience. I really felt I was there in the ice-world of the likeable Iruk klarn (soul-bonded band of fisherman/pirates), meeting their allies, facing their enemies and the strange creatures that inhabit it; taken for a ride on their journeys and adventures. There was a perfect balance of darkness and light, no fairytale. Good writing made it an easy, fluid read which kept me hooked and turning the pages. The plot was satisfying in itself but cleverly led on to the next book. I can’t wait to read the next adventure! Massa is a consummate storyteller and he does it in great style. I highly recommend this to lovers of fantasy.  – Amazon Reviewer 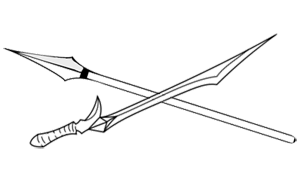